There was recently a post within the 255N Facebook group concerning the state of training of our Soldiers.  The topic was started by Jon Stanley who posted:

I am currently doing a TWI stint with Intelsat General and we process hundreds of peak and pols, carrier access and other things a day. We support many civilian and military organization doing this. On the military side we cover all the services and components. My question is, why is it that I have to talk soldiers and NCOs through how to operate their equipment and how to troubleshoot when there are issues? Don’t get me wrong I have no problems helping and I will talk the…m through it but alot of my issues fall into the 10 level operator area. Now I will caveat this with about 20% of the calls are from actual trainees at Ft. Gordon but the other 80% are another matter. Also the other question is why do most of these teams have the hpa/sspa attenuation set to 0? I have been away from tactical units for awhile but I can’t think of why you would operate with it that way. I am constantly telling them to adjust to keep them from blasting the transponder.

The topic generated a lot of comments within the forum racking up 28 comments in less than 24 hours.  While I won’t post all of the comments (here is a link to see the full posting) Many of the comments boiled down to something along the lines of what Brian Newton posted:

Agreed! Having command buy in is the most important thing. When I was in the 307th, the command was ALL ABOUT TRAINING, but we still had our issues. You have to have the command’s ear AND get the the lower level leadership on the same page! It’s a challenge regardless of environment!! We don’t have the pool of NCOs that worked and took pride in knowing their jobs the way our predecessors had. The equipment has changed and our NCOs have gotten promoted A LOT FASTER!! Gone are the days where the Platoon Sergeant had 16+ years in and the equipment in the platoon was virtually the same as what it was when they were E2s. Now, the majority of SFCs at the companies (if you have a SFC) has no more than 12 years in and they made 7 in under 10 years!!! You have very few Soldiers that LEARN their jobs (at least from what I have experienced). A lot, not all, that know their job came into the Army with some experience or desire to learn it. The majority seem to have picked communications because it gave a bonus! Once they make Sergeant, the ones that don’t eventually become our peers try to get promoted as quickly as possible (nothing wrong with that) and not spending time learning OR TRAINING THE E4s and below beneath them!!!  We (Warrants) bail them out because we won’t allow our bosses to fail, so most commands don’t see how bad this problem really is!!!

Training, or lack thereof, is not something new.  It has been a problem for the Army as a whole for well over a decade (and probably longer than that) due to a variety of reasons.  I mentioned it as an entire set of trends in Aug of this year in my series Trends from the National Training Center.

Since 2001, the Army has had troops deployed to Afghanistan, then Iraq and Afghanistan, and now back to just Afghanistan (although if things keep going the way they are, we may be able to put Iraq back on that list).  During the height of this deployment rotation, units were at times spending less than a year back at home before they headed back on another deployment.  This severely limited their time to do pretty much anything other than unload equipment, fix it, go to a CTC, and then pack it up again.  To think that training along with a variety of other things wouldn’t suffer is completely unrealistic.

Over the last few years though, things have changed.  Units can now generally expect at least two years at home between deployments and as the drawdown in Afghanistan continues that time may well continue to increase.  The fact of the matter is, there is time to train but from a signal perspective, we don’t see it occurring until often it is too late.

Why we don’t Train

In my opinion, there are a few key reasons why Soldiers don’t receive the training that they need in order to be proficient in their jobs today.  While this list is by no means inclusive, I think it is at least the major points.

Loss of the Signal Battalion 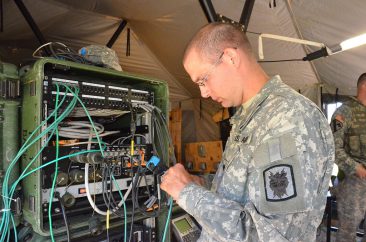 When I joined the Army in 1999 the vast majority of Signal Soldiers (with the exception of the current day 25U) were assigned within the division signal battalion.  The signal battalion had a signal commanding officer who was responsible for all of the signal support across the division.  The companies within it had signal officer commanders and signal NCOs.  The entire organization was full of people who understood just how hard signal can be and realized the importance of their Soldiers staying current and trained.  When the Army went to a modular force, the signal battalion effectively disappeared (there are still some out there but they are a minority compared to the number of signal assets within the BCT.  When we lost all of those signal commanders we lost the focus on signal Soldiers being good at their jobs.

I am not sure when exactly this happened but sometime over the last decade Sergeants time training (STT)more or less disappeared and NCOs lost in my opinion the cornerstone of their training program.  For anyone who is too young to remember it, STT was at a bare minimum a 3-hour block (if not an entire day) one day each week where NCOs trained Soldiers.  Training would focus on common tasks but would also cover MOS related tasks as well.  This time was holy and at many posts, would take a general officer to allow it to be skipped.

Some of you may question this one but in my opinion an increase in units going to the field has made it harder for us to train signal Soldiers.  For the last 10+ years units have been deployed or getting ready to deploy which meant a huge increase in the amount of time they spent in the field.  In my experience going to the field (at least when you’re part of a battalion or higher level exercise) is about the worse time that a signal Soldier can “train”.  When the battalion goes to the field, they have to have their systems up and working so they can complete their mission, that means that we can’t interrupt services or tear down equipment to allow our Soldiers to train.  Signal Soldiers need dedicated time away from the brigade and battalion staffs when they can setup, teardown, and troubleshoot their equipment without the fear of causing the rest of the unit problems.

How we can Fix It

So how do we fix this problem and ensure that our Soldiers have the training that they need in order to install, operate, and maintain their equipment?  There is no silver bullet answer that will magically fix the problem.  For many people the easy answer is simply to bring back the division signal battalion.  While this may help with the problem I personally don’t think it will come close to solving it.  There are still expeditionary signal battalions around and I have seen teams come through NTC that suffer from the same problems that their BCT brothers do as well.  Also when you consider the fact that modularity appears to be here to stay, the division signal battalion is a step back that I don’t see the Army taking.

On the other hand one important step that I would argue is that the brigade signal company should truly be the brigade signal company.  That means at a minimum, consolidating all of the JNNs, CPNs, and HCLOSs within it.  This has several advantages but for the purpose of this post, the biggest one is the fact that it provides a single signal commander who is ultimately responsible for ensuring the readiness of their personnel and equipment.

While I think that consolidating all signal assets is an extremely important step, it is not one that is likely to happen any time soon.  So while we wait for that to happen, we must find other ways.  The brigade S6 must serve as the focal point for this effort.  They must be the advocate for the signal community to the brigade XO and Commander to fight for training opportunities.  This means planning training events, ensuring that those events make it onto the master training calendar, and then reporting to the XO when units fail to support that training.  The S6 should utilize all of the assets available to him/her (S6 Soldiers, subject matter experts within the brigade, CECOM, etc) to provide the Soldiers within the unit the best training available.

Additionally, we need to realize training can occur anywhere at pretty much anytime.  A STT team can setup their system all the way to the point of getting a flashing Linkway light without needing time on the satellite.  A HCLOS team can put in a radio link just using the RF cables and attenuator without getting approved frequencies.  A JNN team can configure, reconfigure, and break their routers just to restore their configurations.  NCOs need to once again become the trainers of Soldiers and not just on common Army tasks but on our technical skills as well.  These skills should be exercised regularly and in a variety of ways.

2 Responses to “The Lost Art of Training Soldiers”