This is part three of a series of posts concerning the network trends that I regularly see here at the National Training Center as units pass through on rotation. 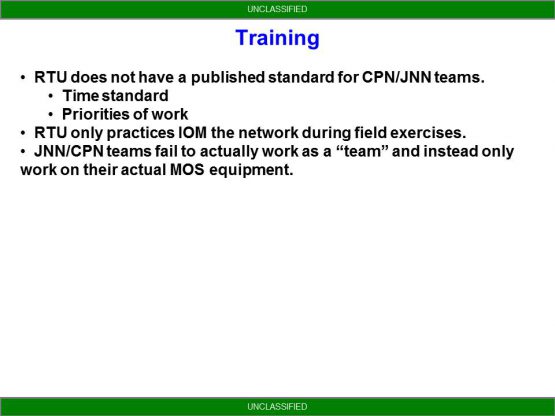 Rotational Training Unit (RTU) does not have a published standard for CPN/JNN teams:

When I first entered the Army in 1999 I was a Small Extension Node (SEN) Operator working with Mobile Subscriber Equipment (MSE). Under MSE the Army had published a series of Army Training and Evaluation Program (ARTEP) outlining standards for the employment and operation of various pieces of equipment including MSE. It established certain steps as well as time standards that teams had to hit in order to be considered “trained” on their equipment. With the advent of WIN-T the ARTEP standards disappeared and units were instead left to rely on SOP. Unfortunately, most units do not have an actual signal SOP and ones that do rarely include equipment employment standards. Additionally the SOPs fail to include priorities of work for teams when they first arrive on site leading the desynchronization of efforts.

It is common to see teams come through NTC who are just not proficient at installing, operating, or maintaining (IOM) their JNNs and CPNs. A large reason for this is that the team only actually works with their equipment when the unit goes to the field at home station. One thing I have noticed over the years is that the field is often the worse place for signal Soldiers to practice employing their equipment. The reason for this is that in order for the rest of the BDE/BN to operate, that equipment must be operational. It is not possible for a team to use this time to practice setting-up and tearing-down the equipment. Units should practice these tasks at home in the motorpool. Both JNNs and CPNs can easily be installed in the motorpool where they can be setup repeatedly.

JNN/CPN teams fail to actually work as a “team”

Under MSE, SEN, Node Center, and other similar teams operated as a true team. The 25F and 25Q would work together to get the entire system operational in a short a period of time as possible. Under WIN-T, I generally see a “team” that operates as separate sections where the 25N works strictly on the JNN, with similar results for the other MOSs. Everyone on a team should be familiar with every job on that team. They can’t be expected to be experts on areas outside of their MOS, but they should at least be able to assist with the installation of the equipment and know what “right” looks like and be able to get assistance when something goes wrong. One recent rotation spent 3 days trying to get a HCLOS antenna installed at the JNN because “they didn’t have enough operators” (25Q). This was despite the fact that they had a 25Q, 25N, and 25S all on shift not doing much of anything.