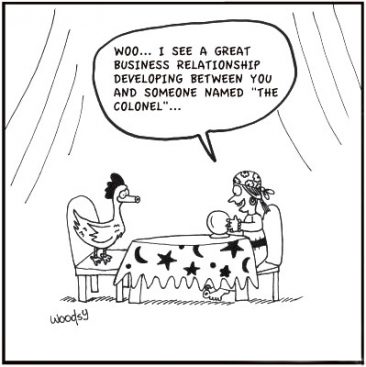 Relationships are a big topic that we talk about in literally ever signal AAR. Why? Because relationships, or lack thereof, can help even the most poorly planned operation a success or kill the most detailed operation. Relationships are important to every staff officer because they enable to not only do our job, but to be much more effective at it. In our AARs, we generally talk about the relationships as they apply to the Brigade and Battalion S6s, today I will focus more on the Net Tech.

So why are relationships important? Having good relationship, especially with key people, help ensure that we have the information we need to do our job, and that the technical guidance that we put out is acted upon. Having a good relationship makes it much more likely that people will work with us to solve problems rather than putting up a fight.

This is an easy one. He is your boss, he is your rater (he is isn’t he?) and he is the guy that is responsible for making sure that the Brigade can talk. Establishing a good relationship with this guy should be your number one goal. The S6 needs to be your biggest advocate to the XO and the rest of the Brigade staff, he needs to be your sounding board for ideas and he needs to be able to tell you when you’re going off in the wrong direction.

The Signal Company Commander (and his/her 1SG) should be your best friend right next to the S6. In our Signal AARs we talk about the S6 and Commander having a good relationship generally concerning retrans operations, but here we’re more concerned with the fact that they directly control nearly half (3/8) of your WIN-T nodes in a normal BCT. He is responsible for making sure that those teams are trained, equipped, maintained, and manned in order to do their missions. He has the ability to directly influence how your interaction with the JNNs and STB CPN works and can help ensure that your priorities match those of the teams. A good relationship with the company commander will often mean that the network can be installed much more quickly and according to the priorities that you establish.

Being a battalion S6 is a hard job. They are often a junior CPT although I have seen more and more cases where they are brand new LTs just out of school. They are the “geek” in a room full of “grunts” who have the impossible task of making sure that their Commander can not only talk to your Commander, but also all of his company commanders. He has an extremely limited staff and even less time, but they each control a small but important part of the network. The key to having a good relationship with these guys is to first and foremost acknowledge that these guys have a hard freaking job. If you do what you can to make life easier for them, they will generally be more than willing to work with you. If you ask them for something, make sure it’s something that you really need (don’t have them do stuff just for the sake of doing stuff), be flexible and think about what it would be like if you were in their situation.

If you have a solid Brigade S6 who is engaged with the rest of the staff, your interaction with these two guys will likely be substantially less than otherwise but it is important for you to know them, and them to know you regardless. Chances are that the XO is probably your senior rater so knowing him and making sure that he knows what you do in life is definitely important. Aside from that though, these two guys are truly the center of gravity for a huge chunk of everything that goes on across the Brigade. The XO runs that TOC while the S3 is intimately involved in the planning and execution for everything that is going on across the Brigade. If you’re in the unfortunate situation of having an S6 who is less than fully engaged with the rest of the Brigade staff then you having a good working relationship with these guys is even more important. Also, remember that neither you nor the S6 have tasking authority. The S3, on the other hand, does so when we need something put into and order or when a unit fails to follow-through on an order, this is your go to guy.

By Division G6, I mean the entire section, not just the one guy. The G6 can be a huge resource for you, not just deployed but at home too. First it is home to a couple of fellow 255Ns who have most likely been in your shoes before. Ask them for advice frequently and listen. If you’re not sure how to do something, one of them has probably done it before. The G6 home to your unit hub node which more and more units are using and can assist you with problems. The G6 has a huge staff within it that covers a wide range of areas; just like you have more people to solve problems than the Battalions, the same is true with the G6 so take advantage of their resources.

You’re Soldiers and Operators can single handily be your greatest enabler or make your life beyond hard. By Soldiers I mean the ones that work directly for you within NETOPS. They are your direct representative and in theory should be heading off a lot of the work before it gets to you. Everyone wants to know how Chief manages to do everything so easily, the secret is (at least in my case) that you have great Soldiers who you have taken the time to train and enabled them to be successful.

With Operators I mean all of the JNN, CPN, STT, and HCLOS operators that are working for you indirectly across the Brigade. These guys are really the ones who make the network work, we just point them in the right direction. Having a good relationship with them means that they will take the time to solve problems on their own, but know to reach out to you when something passes their skill level. It means that they will get you the information that you need in a timely manner. It means that they will be willing to make the call and say they screwed something up rather than trying to hide it until it’s too late.

With your Soldiers and Operators it is more important than any other group I have listed already for you to have a balanced relationship. In my own humble opinion they need to respect and maybe be a touch afraid of you, but at the same time be friendly and open to them. Reach out to them not just when you need something but call and check up to see if they are having any issues and show that you care. The Net Tech who is nothing but an ass to these guys may well be successful but he will have to work twice as hard and not be nearly as effective as someone who is able to build a balanced relationship with these guys.

Last but certainly not least is your fellow (non-signal) warrants within the Brigade specifically, but also across the Army at large. These guys are all experts in their own right just like you. It is amazing to me how much benefit I have had over the years because I could talk to an intel warrant or the fires guy or something else. We’re all friends with the S1 and food services guys but trust me when I say that every single warrant out there has a connection or tidbit of knowledge that can help you out at one time or another. Take the time to get to know each and every one of them. Join your local warrant officer association and build those connections that can follow you for the rest of your career. You never know when one of these guys will be able to save your butt in the most unusual way.

While these are in no way the only relationships you need to worry about (don’t forget your wife/husband in there somewhere) they are some of the key ones. Life is all about relationships. The benefits we can receive from many of them are obvious while others less so but it’s usually those less obvious ones that are most beneficial in the long run. Treat everyone with respect because you never know when that guy you told to fuck off today will be someone you need or better yet, your boss, in the future. There are plenty of people I have worked with over the years that I haven’t liked personally or gotten along with for one reason or another but I still at least try to keep the professional relationship professional and it has helped me many times.

Stories from the Field

So a few stories just to illustrate my point:

12 Responses to “Building Relationships for a Easier Future”