This is part four of a series of posts concerning the network trends that I regularly see here at the National Training Center as units pass through on rotation. 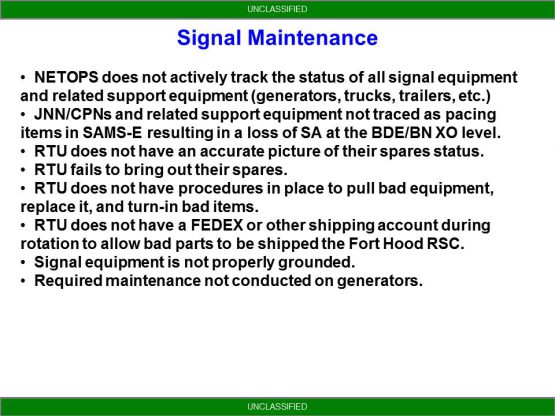 S6 does not actively track the status of all signal equipment and related support equipment:

The Brigade S6 is responsible for providing the overall communications plan for the BCT. In order to accomplish that mission, they must continually know the status of all systems that support that mission to include JNNs, CPNs, and STTs along with their support equipment (generators). Generally, I believe that NETOPS should be responsible for consolidating this information and giving a summary to the S6.

JNN/CPNs and related support equipment not tracked as pacing items in SAMS-E resulting in a loss of SA at the BDE/BN XO level:

Major signal equipment (JNNs and CPNs) is a weapons system just like an Apache helicopter or M1A1. If the system isn’t working, it can significantly degrade the commander’s ability to complete his mission. The official tracking mechanism for all equipment maintenance is the SAMS-E system which is able to provide instant visibility to the commander and XO about the status of all major systems. For some reason though, many units don’t have their signal equipment entered into the SAMS-E box. This should be a requirement for all units. Additionally when the JNN or CPN is entered, it, along with all supporting equipment should be entered as a system so that we realize that when the STT or supporting generator is deadlined, that the entire system is affected by that.

RTU does not have an accurate picture of their spares status

Each unit is issued one or more spares sets when they were initially fielded with their WIN-T equipment. Unfortunately, this equipment is not on the property book and often gets lost in the shuffle. Spares need to be tracked both at the local level and at the Brigade level to give an overall picture of what the unit’s capabilities are. This equipment should be periodically inventoried (like all other equipment) and maintained so that it is fully functional when needed.

RTU fails to bring out their spares:

This comment is relatively specific to NTC but does still apply to any time the unit leaves the motor pool. Spare equipment is great but if you don’t bring it with you, it doesn’t do a lot of good. I routinely see one of two situations arise. 1. The unit doesn’t bring the equipment at all to Fort Irwin and instead leaves it at home station. This seriously jeopardizes the unit’s ability to talk if (when) something breaks and they are unable to replace it with an on-hand spare. 2. The unit does bring their spares to Fort Irwin, but instead of taking them into the box, leaves them back in the RUBA. It is difficult to move all of the equipment associated with a unit into the field using just its assigned vehicles and trailers. However for critical equipment, like spares, plans must be made to get it into the field. If the equipment is left in the RUBA, it requires a combat patrol to first go and get the equipment, and then move it to the location that needs it. This can significantly delay the repair of equipment.

RTU does not have procedures in place to pull bad equipment, replace it, and turn-in bad items:

It is important for each unit to have an established and documented maintenance procedure in place. This procedure must include the process that is required to request spare parts, replacing bad equipment, and then turning in the bad equipment for repair/replacement from CECOM or the supporting Regional Support Center (RSC). If these procedures are not established and followed, it is not unusual for some to pull a spare piece of equipment only to discover that it was previously marked as “bad” and never repaired.

RTU does not have a FEDEX or other shipping account during rotation to allow bad parts to be shipped the Fort Hood RSC:

Another situation, that is unique to units while they are here at the National Training Center, is that they are responsible for sending damaged/broken equipment from here to the supporting RSC. There are a variety of ways to do this but generally the fastest way, to do this, is by sending it overnight via FedEx. The CECOM and General Dynamics support that are here for each rotation are often more than willing to not only package but also ship the equipment of the unit (they leave the box every day and it’s pretty easy to stop by the local FedEx office) but they require an account number to bill against. It is the S4’s responsibility to get that account number, but the S6 should know what that number is for when it is needed. Once the RSC has received the bad equipment, they will send the replacement back (generally overnight). Please have this part figured out before you even leave home station. I have seen several incidents where a system was down for nearly a week simply because the unit was unable to figure out how to ship a bad part.

Signal equipment is not properly grounded:

Grounding is critical (and often neglected) step that must be taken with each and every piece of equipment. Grounding is important because it can save not only equipment but also personnel’s lives in the event of lighting hit or other power surges. I have personally seen someone seriously injured and $100k+ in equipment damage in separate incidents because lighting struck and the equipment wasn’t properly grounded. Grounding is neglected for a few reasons. First, people fail to realize the importance of it even though there are multiple safety warnings on most equipment and every technical manual. Next, it is just a flat out pain in the ass to take the time and energy to pound in a ground rod. Star grounds have made this significantly easier, but it is still a pain. Finally, even when units do take the time to ground something, it is not uncommon to see it done incorrectly especially given the very poor ground quality that the sand of NTC provides.

Required maintenance not conducted on generators:

Our equipment depends on power and in the desert, the only power they have to operate off of their tactical generators. These generators, especially when operated for extended periods of time out here in the desert need to be properly maintained. The STTs have two power options, the on-board generator as well as external power from a 10k generator. The JNNs, HCLOS, and CPNs all require external power from either a 5 or 10k generator (see the applicable TM). While the tactical generators (5 and 10k) are able to operate for 250 hours between oil changes, the on-board generators are only good for 100 hours. A typical rotation is approximately 450 hours of generator time (including RSOI) and yet we routinely see teams who will attempt to go through an entire rotation without changing the oil only to destroy the generator. Two morals to the story: 1. It is a lot shorter outage to change the oil (maybe 30 minutes) compared to burning up the generator (possibly days and lots of money). 2. It is the BCT S6s responsibility to have visibility on maintenance and to hit the unit up if they are going past hours without completing the required services.