As an Observer, Coach, Trainer (OC/T) here at the National Training Center, we have two primary jobs. The first one is to observe (watch what you’re doing), coach (give you that little nudge to help you through something that you may not be comfortable with, and train (teach you the stuff that you just haven’t learned somewhere else for a variety of reasons) each and every unit that comes through here on rotation. On a year with a full calendar (like last year), that means I get the chance to work very closely with 10 BCTs for about 3 weeks each. Given the way the rotation is designed, we cover a huge range of things. While some units are obviously stronger than others, I like to think that each and every one of them learns a fair bit after we are doing working with them at the end of the rotation.Our other job (and I personally think more important one) is to identify trends across the force and then let everyone know about them. We identify trends just by doing our normal daily job each rotation. When you see multiple units doing the same thing over and over again, that is a trend. Trends can be both sustains and improves although we obviously spend more time focusing on the improves because that’s what we’re looking to change across the force. We distribute those trends through a variety of means including briefings, articles and white papers in the various military publications, the coaching and teaching we do each rotation and at least in my case, unofficially through this blog.I have developed a 9-page trend brief that focuses exclusively on NETOPS. Over my next few posts I will be talking about various sections of this brief and giving the general overview of the trends that I see each and every rotation. Some of the topics in here will eventually lead to much longer dedicated posts because I think the deserve it but for right now a good overview is beneficial to everyone.

Time is often the most valuable resource for anyone. The time between the unit arriving at Fort Irwin and rolling to the box is critical for the BCT S6. This is the unit’s opportunity to test out and validate equipment and configurations. As a general rule, once Reception and Onward Integration (RSOI) day 1 comes around, the S6 is running at full blast and it is often extremely difficult to truly validate the network at that point. Because of this, it is important that the WAN is fully validated before RSOI1. In order for this to happen, a coordinated effort between the BDE S4 and S6 must be made to ensure the arrival of CPNs, JNNs, STTs, generators, and other critical equipment as early as possible. The unit must also have full visibility of the current location of all equipment while it is in movement. Likewise, when moving from the RUBA to the Box, critical signal items often are not considered in the movement plan or get left off their convoys. Two recent rotations waited nearly 48 hours for their servers to arrive in the box. In one case, the vehicle that they were in was moved from the first serial to the last serial which was subsequently delayed for a number of reasons. In another case, the servers were supposed to move by air into the box but aircraft were grounded due to winds. In both cases, the unit’s lack of contingency plans costs critical time in establishing services for the unit.

There are a number of tasks that must be completed by the unit prior to leaving the RUBA. From a signal standpoint, one of the most critical tasks is the validation of the network. It is important to validate the network for a number of reasons. It is not uncommon for equipment to by physically damaged when it moved from home station to NTC. RSOI is a great time to ensure that all equipment is operational and to fix any damaged equipment that is found. Likewise, it is not uncommon for configurations from previous exercises to still be loaded in equipment when it arrives. There is the potential that these configurations may conflict with the current configurations and cause network problems. In both of these cases, it is significantly easier to correct these and many other problems with the Net Tech is collocated with and has ready access to all of the equipment. Once the unit moves into the box and training begins, it is significantly harder to move people and equipment across the battlefield to troubleshoot.

RTU fails to fully develop and document network plan at a technical level: 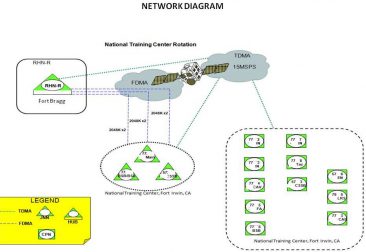 When I meet a Net Tech for the first time when they arrive at NTC one thing I ask each time is “what is your plan for the network?” Frequently I get the response back “Well we have TDMA and FDMA and I think we’re going to put in some fiber and HCLOS links, but we’re not really sure.” Next I ask them to give me their network diagram and I receive something very similar to what you see below. While it is not at all unreasonable to not have a complete plan in place when you first arrive (you may not have any idea where units will be setup which prevents you from being able to come up with a LOS plan), you should at least have a good idea of what your plan is. As the plan is refined, it is important to update the documentation (i.e. diagrams) every time the network changes. This includes the addition of LOS and fiber connections among others. This diagram should not only have a high-level view (similar to what is shown here) but also have a much more detailed picture of the network. I will be writing another post about this in much more detail in the future.

So what’s wrong with this diagram? At first glance there don’t seem to be any major problems with this diagram. It included dates, mission number and other things (all removed for OPSEC). It has all nodes on (node and unit IDs have been removed for OPSEC and to protect the innocent). But there are actually a number of problems here. First, the RHN that the unit was shooting to was Camp Roberts, not Fort Bragg. Secondly, you may notice that the network is larger than normal. While it was (the unit had an attached aviation BN along with CSSB, Engineer BN, long range recon unit and several nodes from an ESB looking at the diagram they are all operating off of one TDMA mesh, in reality it was two. Additionally, this diagram was never updated throughout the entire rotation to reflect the installation of LOS and other links.

RTU fails to get input from BDE/BN S3 and then feed network plan back to the S3. This often results in command posts being placed in a location that interfere with the network plan (loss of LOS):

A huge number of factors go into the selection of a TOC location. Signal is just one of them. Signal should not be the deciding factor for a TOC location except in extreme cases, but it is important that it is actively discussed between the S6 and S3 as a consideration.

During a decisive action rotation, the BDE Main and BN Mains will move frequently. It is important for the BDE S6 to be tracking all of these locations in order to build the mission command Common Operating Procedure (COP). As units are planning the moves of their mains, the S6 is responsible for reviewing the proposed locations and doing an assessment of the impact to communications. From an Upper T/I perspective possible impacts include the loss of line-of-sight (LOS) for high speed radio links and depending on terrain, the possible loss of LOS to the satellite if the new location is very close to a hill or mountain. From a Lower T/I perspective terrain can significantly degrade FM communications and effect other radio systems.

RTU fails to recognize the 2nd and 3rd order effects on routing that network changes (fiber, HCLOS, SMART-T, etc.) has on the network:

Even small changes to the network (especially on the NIPR or colorless side) can have 2nd and 3rd order effects across the rest of the network (on both SIPR and NIPR). The Net Tech must evaluate these effects prior to making network changes and ensure that they don’t produce unintended consequences. Units will frequently install a HCLOS or other cross-connects at NTC for the first time. While these connections are important and should be installed, their addition can have effects on routing across the entire network and not just between those two nodes as originally envisioned. Detailed network diagrams can greatly aid in identifying these effects prior to them happening.

RTU does not plan for external power to support STTs:

There are few war-fighting functions (WfF) that are as dependant on power as signal. Power is a huge problem for signal teams at NTC. Units often rely on the TOC power for signal equipment only to discover that they can’t support the load or that the equipment has maintenance problems. Signal equipment must have its own independent power supply. Likewise, the on-board generators for the STTs should not be considered its primary power. A dedicated 10k generator should be primary with the on-board as a backup only. All critical systems should have a plan in place to operate off of a backup power source in the event of a power failure. This procedure should be formed as a battle drill and practiced regularly.