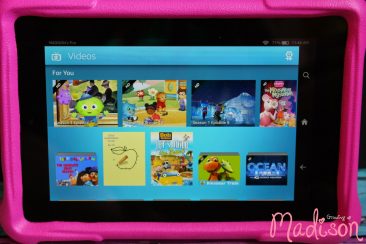 FYI, this post is more of a rant than anything else so feel free not to read it.  Many of you probably don’t know but I have a 10 year old daughter and a 6 year old son.  A few years ago for Christmas we bought them both these Kindle kids editions.  The thing is really just a normal kindle, but it comes with a plastic protector around it (which is actually pretty damn beefy) and more importantly, it comes preconfigured with their “Freetime” application that basically sandboxes the kids account and greatly limits what they can do and get to.  It also comes with free content like a number of applications as well as age appropriate books, etc.

As soon as we bought the thing, it became obvious that Amazon didn’t spend a great deal of time thinking about a lot of things and we eventually figured out that they were in no rush to fix most of it.  For example unless the app is pre-approved a kid can’t download it.  This causes me to download it onto their device on my account to give them permission so that they can download it from their account because the accounts are sandboxed and apps on one aren’t accessible by another account.  A big pain in the ass, but not the end of the world.  After a bit of time, you figure out the quirks and you learn to work around them.

Last night my wife approached me to say that my daughter had asked to have her account removed from Freetime and given a “normal” kindle account so she had a little bit more freedom.  We eventually agreed to give it a try (after threats of death if she started abusing it) and went about giving her a regular account.  I decided to go ahead and completely wipe the kindle just to make life easier and start fresh.  When it came time to associate the kindle with an account I signed in with the master account per usual and the daughters was automatically added.  I began to explore around on how to get rid of Freetime.  Eventually I found where you could unsubscriber her from it which I did.  I figured that if she wasn’t subscribed, it would just go to a normal account.  No.  Instead you just lose access to the free content but are still locked into their user interface (UI).

Ok, Kindle 1 Troy 0.  Next I figured that because the account has her age, that it was probably something to do with that.  So I decided to go into her profile and edit her birthday to make her 17 years old.  That has to work.  How could Amazon expect a 17 year old to love with something like this.  I edit the birthday, log back in, and am greeted by the same kids UI.  Shit.  Kindle 2, Troy nada.  I start to browse around on Amazon and after doing a substantial bit of digging find their “teen” accounts.

Based on my very limited searching, it looks like Amazon made teen accounts fairly recently.  The idea was that it would give the teen their own personal account for use when it came to ordering and other things.  The cool part is that while the teen could place any orders they wanted, the order had to be approved by the parent before it would actually be processed.  Cool.  Not a bad idea.  This has to work.  I go to create my daughter her very own teen account which of course requires an email address which means I have to create and email address for her.  Email address created, I create the teen account on Amazon.  I bring the kindle back up, log out of our master account and try to log in with my daughters brand new teen account.  It doesn’t work.  I check to make sure that I didn’t fat finger a password or something and still no luck.  I log back into our master account to see if it appears there like it used to with her kid account.  The kid account is gone (which I expected) but no teen account has taken it’s place.  Log back out and try to go back in with her teen account.  Still no love.  Back to Google.  Turns out that Amazon once again made a good idea completely stupid.  The teen accounts are actually made for the sole purpose of shopping and watching movies.  You can’t actually log into a Kindle (and I don’t even think the website) with them, instead they have to be used specifically on the shopping and movie apps for your cell phone.  Other then that, they are completely worthless.

Well damn.  Kindle 3, Troy goose egg.  Doing some more digging, I am by far not the only parent to run into these problems and to be just as (if not more) frustrated with Amazon and their system.  It appears that the only way to get a regular kindle interface is with an adult account.  Unfortunately with Amazon’s household feature which allows you to link accounts so they can share content between them you can only have two adult accounts.  In our particular case, my wife has the master account (long story) and while I have an account that is linked to hers, I almost exclusively use her account for everything leaving mine pretty much unused.  So once again, I logged in with the master account and find mine sitting on the kindle.  I log into that on the system and am greeted with the desired “adult” interface.  I next spend probably 45 minutes exploring the parental control settings that are available on an adult account and go about locking down my own account as best as I can.

Finally I am done (or at least as done as I can be).  I absolutely hate this solution because it’s just fucking stupid.  This is a piss poor design, not documented anywhere as far as I can tell (expect in user forums with their own trail and error) and is pretty half ass.  I would call it a victory on my end but in all honesty, its not.  At best I think the Kindle felt bad for me and just decided to quit the match and walk away, leaving me the winner by default.  At the end of the night what I figured would take maybe 15 minutes to do ended up using well over 2 hours of my time (at least) and in the process caused me to lose my own freaking Amazon account.  Rant over, go about your night.