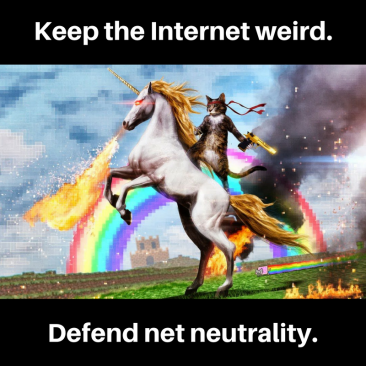 Today Signal-Chief.com is joining the likes of Github, Google, Amazon and host of countless others who are protesting the FCC’s proposal to end its current policy of Net Neutrality.  For anyone who has lived in a box and has no idea what Net Neutrality is, its the idea that your ISP or the government should not be able to discriminate or charge differently for different users, content, or application.  Take for example this website.  I make absolutely no money from Signal-Chief and do it simply because I love what I do.  However, there are plenty of much larger sites out there that cover similar topics to me (I just happen to do it better in my own humble opinion).  Anyway, if they have the budget, without Net Neutrality there is nothing keeping Comcast, Verizon, or any other ISP for that matter from signing an agreement with one of those other sites to prioritize their traffic.  Meaning while their content will load at regular or even faster speed, when you go to Signal-Chief.com its like loading porn on your old dial-up connection in 1997 (it always stops just when it’s starting to get good).

In April 2015, the FCC issued out rules putting in place Net Neutrality for US ISPs making it a violation for them to discriminate against content.  Shortly there after several of the larger ISPs filed suit saying that the FCC didn’t have the authority to regulate them.  The US Court of Appeals sided with the FCC and it stood until this April when the new commissioner of the FCC began discussions about removing the rule.  That is where we are today.  As of right now it still stands but that can change at any time.  I highly encourage you to comment of the FCC’s website about this proposal.  I further encourage you to write your Congressmen/women and Senators and ask them to pass actual legislation making Net Neutrality the actual law and not just a regulation.