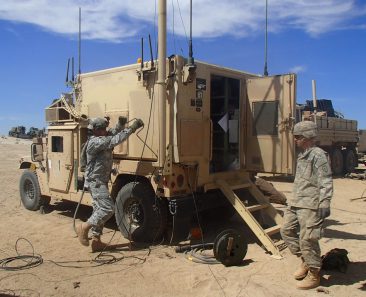 I think that most in the military would agree that there has to be someone in charge.  Who that person is may well change for a variety of situations, but there is always someone that is in charge.  From a command perspective it is the Commander followed normally by his deputy.  From a mission command perspective it is normally the TOC (or Main) followed by the TAC.  From a network perspective it is NETOPS followed by….  Up until now we really haven’t had to worry about who was going to take charge of the network if NETOPS wasn’t around.  We’ve been working out of static FOBs and the chances of NETOPS not being around were remote.

As we move into a decisive action environment where the entire BCT must be mobile, we just face the fact that there will likely be a time when Main isn’t up and running because it is jumping.  While there a huge number of second and third order effects related to this, one of them is the fact that NETOPS essentially doesn’t exist for that period of time as well.  Who is responsible for at the very least monitoring, managing and report the network back to the division?  As best as I can tell, there is no doctrinal answer to this.

Some people would argue that the S6 element at the brigade TAC should be that guy and while I am not against that, there are a few things to consider.  First, in my experience there isn’t a network (255N, 25N) guy located at the TAC.  Yes there is normally a couple of 25Us, maybe the FA53 and a 25B for two.  We could fall back to the JNN team that is supporting the TAC but as we discussed previously, that JNN may not actually be located at the TAC for a number of reasons as well.  So we must consider, do we trust a CPN team to provide the continuity and expertise to backup NETOPS while we are gone?

Others would say that the second JNN which may well be located at the TAC but can often be found at the BSA should be that backup function.   I would argue that they are most likely in the best position to be conducting that function.  In theory, they should already be monitoring connectivity to the other nodes within the network as part of their job.  They probably have a LT and a senior NCO there (PLT Leader and PLT SGT) who have some signal experience and would make a good liaison to the division.

It is important that a section as important as NETOPS have a backup.  This backup should be identified long before they are needed and operate in a mode where they can easily take over the network at any point, even if NETOPS drops unexpectedly.  That means that they are already configured to monitor the network and know what their responsibilities are.  It is important to ensure that key people (JNN/CPN operators, Division NETOPS, etc.) know who that backup person are and how to get a hold of them in case NETOPS drops off for some reason.  It is also equally as important that when the time does come for them to take over (planned or unplanned) that this change is communicated across the brigade as quickly as possible so that operators can adjust as needed.  We must all come to realize that the fight doesn’t stop just because the Main is in the process of jumping.