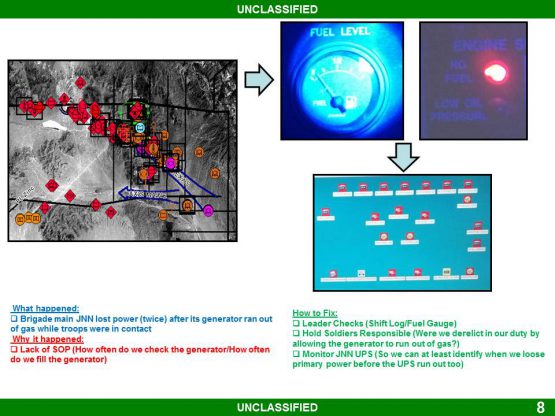 Just a quick post today.  I didn’t include it in my NTC trends (although I probably should have) but something so incredibly easy to fix and yet I have seen it happen probably almost every single rotation (and in fairness, it happens probably once a rotation for my teams command post too)…..Getting air in the fuel line (aka…running out of gas).  Since the dawn of time (or at least as long as we’ve had fuel powered machines on the battle field), someone has forgotten to fill the stupid thing with gas.

I remember once upon a time when allowing a generator to run out of gas would often result in an Article 15 for the person responsible but that is not the case anymore.  Instead, a generator runs out of gas, the power goes out, systems drop, and Soldiers scramble and then blame it on pretty much anything other than running out of gas.

The simple fact is that our TOCs and equipment need power to operate and in order to get power, generators have to have fuel in them.  When the JNN, STT, or CPN loses power it means that Commanders can’t talk and in some situations people can die.  As you can see from the attached story board I did for a rotation a while back the Brigade was in the middle of the fight in direct engagement with the enemy when suddenly the TOC lost all Upper T/I.  Fire missions stopped being processed, medivacs stopped being dispatched, and for about 5 minutes or so, the TOC (including the commander) was out of the fight.  All because PVT Snuffy neglected to fill the generator, and his/her NCO failed to do a spot check.

There are plenty of things that occur on the battlefield that we have little to no control over that will disrupt comms, running out of gas is not one of those.  NCOs need to do spot checks throughout the day and ensure that Soldiers are taking the time to maintain their equipment (that means PMCS, maintenance, and putting gas in it).  Commanders need to hold Soldiers and NCOs responsible for failing to maintain their equipment.