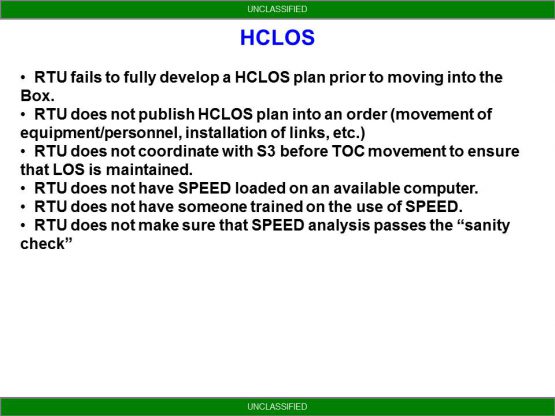 RTU fails to fully develop a HCLOS plan prior to moving into the Box:

Having a plan to employ the HCLOS (and actually telling people what that plan is) is critical to getting the network in a timely manner. It is important for the Net Tech to generate a plan from the beginning and circulate it around the Battalions, even if there are still some holes in it. It is not uncommon for exactly locations of units to be unknown prior to moving into the field however you should have a pretty good idea. By publishing the plan prior to movement, and then just filling in one or two missing holes once you arrive on site, it is possible to install the HCLOS links very quickly once you are up on satellite.

RTU does not publish HCLOS plan into an order (movement of equipment/personnel, installation of links, etc.):

The Army is an organization that works based on orders. Generally, these orders come in the form of a written Operations Order or Fragmentary Order. An order is a command given by a commander to someone else. As group, the S6 often neglects to put key tasks into an order and instead relies on S6 to S6 saying that we need something done and then expecting it to be done (which it often isn’t). All signal tasks, including the HCLOS plan must be included in an order. This is especially true if the plan requires the movement of personnel and/or equipment from one unit to the other (i.e. attaching a HCLOS team from the Signal Company to a BN). Once an order/frago has been produced, a supporting Technical Service Order (TSO) should also be produced with the detailed technical information for the shot (frequency, azimuth, data rate, etc.)

RTU does not coordinate with S3 before TOC movement to ensure that LOS is maintained:

Under Mobile Subscriber Equipment (MSE) it was vital that a unit maintain line-of-sight when it moved because a satellite link was extremely rare. Because of this, the S6 was very tightly integrated into the planning process along with the S3. With WIN-T, the requirement to maintain LOS is no longer there since we operate on a satellite backbone but it is still is an important consideration. Far too often I will see a unit who will have a HCLOS link in, pick up and move to a new location and drop LOS. That in and of itself is not a big deal, but what I often see is that if the unit had just moved to the side by a kilometer or two or adjusted their position by just a little bit, that LOS would be maintained, HCLOS could be reestablished, and the network improved.
I am by no means saying that keeping LOS should dictate the location of a unit (that was true at one time, but not so now) but I am saying that it is a constraint that should be acknowledged and considered along with a host of others (protection, ability to allow for sustainment, accessibility, among many others) that the Commander and S3 should be informed of and considered when they make their decision. In order for this to happen though, the S6 must be fully integrated into the planning process with the S3 from the beginning. If we move a unit, have it setup, and then consider LOS, it is already too late.
The last part of this to point out the importance of having the right signal guy in the quartering party when a unit moves to a new location. Picking a good spot for anything when you are looking at a map is fairly easy compared to when you actually get on the ground. It is important to have a “smart-guy” there with the initial quartering party that is able to look at the ground around them and decide if it can support whatever the plan is. Once again, if we wait to provide that input until the 2nd or 3rd serials of the convoy arrives, it is already too late because the main is will on the way to being established at that point.

I combined these two together just to keep things simple. SPEED is a pretty simple radio link analysis program. With the proper map data, it is able to examine the terrain between two points on the map and determine if it will technical characteristics of the radio system will allow the link to work. It is hugely beneficial when it comes to planning any kind of a radio network. The problem is, that in order for SPEED to work, it must first be loaded onto a computer, next you need to have current map data for the area of operations, and third (and maybe most importantly) you must actually bring the computer to the field with you. Likewise, it is important to have MULTIPLE people trained on it. While your 25E should absolutely know how to use SPEED (he is your spectrum expert after all, right?), he should be the only one. What happens when he is on R&R, on a convoy, puking his guts out, or pulling guard duty and we have to figure out if a plan will work quickly. SPEED is pretty damn simple to use and there is no reason why half of the S6 shop can’t be trained to operate it proficiently in just a few hours.

RTU does not make sure that SPEED analysis passes the “sanity check”:

With as beneficial as SPEED is to link analysis, it is not the 100% answer to the test. It is important to spend the time to make sure what SPEED says passes the sanity check with a human pair of eyes. I have seen SPEED say that a link will pass but when you examine the link in detail you realize that it is passing through 100 ft of mountain. The technical analysis may well say that it passes, but an experienced NCO will likely know better.